IFA BETWEEN LEGEND AND HOPE

IFA is not just a simple acronym, IFA is the symbol of the Romanian physics.

Past. The Institute of Atomic Physics (IFA) located at Magurele was established in 1956. It spun off from the Institute of Physics of the Romanian Academy founded in 1949 under the leadership of the eminent scientist Horia Hulubei who was also the first director of IFA. IFA laid the foundations of a Romanian scientific research elite and a renowned scientific research school: IFA is the cradle of the Romanian physics. The development of the Platform of Physics located at Magurele reached its peak in the 1970s bringing together a human potential and a research, educational, even a social infrastructure impressive for that time. The science performed at Magurele became widely acknowledged by the international scientific community, setting a high standard for the Romanian scientific research. In 1973 IFA was incorporated, along with other research and educational institutes throughout the country, into the Central Institute of Physics (ICEFIZ) belonging to the State Committee for Nuclear Energy (CSEN). In 1977 ICEFIZ was reorganized by setting up the main physics research institutes and technological units, specialized in fields of activity as follows: Magurele Physics Platform – physics and nuclear engineering, laser and plasma, materials, earth physics, space sciences, nuclear equipment; Cluj-Napoca – molecular and isotopic technologies; Iasi – technical physics; Ramnicu-Valcea – heavy water.
In January 1990, IFA re-emerged as a public institution with legal personality, under Romanian Government direct subordination, by taking over ICEFIZ research institutes following CSEN dissolution. In 1996, IFA was virtually dismembered into the national research and development institutes of today, five of which located at present at Magurele: the National Institute of Physics and Nuclear Engineering, the National Institute for Laser, Plasma and Radiation Physics, the National Institute for Space Sciences, the National Institute for Materials Physics, the National Institute for Earth Physics, the National Institute of Optoelectronics. Since 1999 when the Contract of Association with EURATOM has been signed, the Institute of Atomic Physics has coordinated the participation of the Romanian scientific research in the European Programme on Controlled Thermonuclear Fusion, accomplished within the Framework Programmes of the European Union. The participation in the European Fusion Programme is by projects granted annually by international competition.
In the period 2001-2006, the Institute of Atomic Physics managed the “Basic Research of Socio-Economic Interest Programme - CERES” of the National Plan for Research-Development and Innovation and the Module ”R & D Complex Projects” in the fields of basic and nuclear physics, socio-economics and humanistic sciences within the Excellence Programme (CEEX), between 2005-2008.

Present. Today, IFA is in full process of reshaping. Its new mission, according to the Government Ordinance No.1608/2008 regarding IFA reorganization and the Decision No. 9642/2009 issued by the President of the National Authority for Scientific Research (ANCS), consists in contributing to the elaboration and implementation of a coherent and stimulating scientific research and technological development policy in the field of atomic and subatomic physics, strengthening the Romanian scientific potential with a view to increasing both the socio-economic and scientific impact and the international visibility in this field of physics. To this end, the main objectives of the Institute of Atomic Physics envisage: evaluating the national scientific potential in the field of atomic and subatomic physics and elaborating an adequate development strategy; promoting the scientific partnership and representing this field of physics at international level (EURATOM, CERN, major research infrastructure projects such as International Thermonuclear Experimental Reactor (ITER) and Extreme Light Infrastructure (ELI) etc.); initiating and managing the national and international R & D programmes; facilitating the knowledge transfer in order to increase the impact on other areas of activity.

Future. IFA is a NAME, a SYMBOL that must be preserved and consolidated. IFA can and will ensure the consistence and the coherence of the Romanian physics research. The legend of IFA can live on giving us the hope of a future measuring at least the past. It rests upon all of us to successfully accomplish this aim. 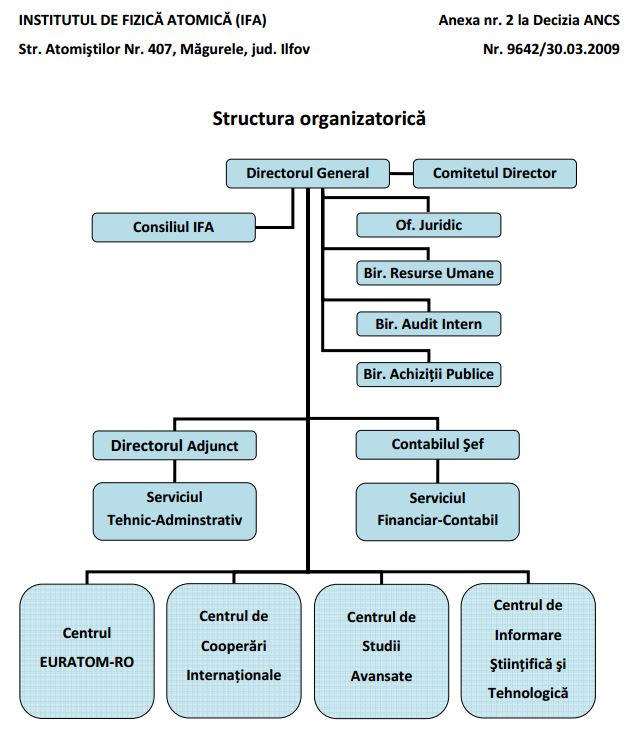 In order to request in writing information of public interest regarding the activity of the Institute of Atomic Physics, please fill in an application and send it to the Institute address (Atomistilor Street, 407, Magurele, 077125, Ilfov County, Romania).

If you believe that the right to access information of public interest has been infringed, you may address an administrative complaint, according to law.

The required forms, set out in the Methodological Norms for the application of Law 544/2001, are available below for download:

The list of information of public interest communicated ex officio, according to Law no. 544/2001, article 5, paragraph 1: